It happened just like a similar experience I had with graves that I have been searching for, for almost thirty years. This relates to an experience that I shared with our members in a previous edition of the branch newsletter. My family research started in 1984 when I searched for the grave of my great-grandfather's father, Carolus Johannes van Aardt,  that died at the youthful age of 27 years in the Somerset East district. I did not find the grave at the time, but my gooseflesh moment arrived when the late William van der Vyver of Cape Town sent me a photo in 2002 of the small tombstone that he found on the farm Modderfontein, in Somerset East district.

There was however still a missing link, ie.  the  grave of Carolus Johannes' father, Frans Johannes van Aardt. He farmed on the farm Roodewal located south of Bosberg on the West Bank of the Great Fish River. His first wife, Susanna Tregardt Wilhelmina, sister of the trekker leader Louis Tregardt, operated the cook house for British soldiers at the Roodewal Post. Hence the name  Kookhuisdrif, Kookhuis and later Cookhouse.  After her relatively early death, date unknown, Frans Johannes remarried Maria Johanna Mentz, widow of Charles Allen. According to her death notice   "She died accidentally on the road to Balfour, Stockenstrom district" on 01/30/1869. According to John French's death notice, he was on 06.06.1856 in the Somerset East district died.

The farm Roodewal is still family owned aftr more than 200 years. It is currently owned by Willem Petrus van Aardt, descendant of Frans Johannes and Susanna Wilhelmina van Aardt, a well known Merino farmer of the Eastern Cape. My search for the grave of Carolus Johannes also aroused the interset of Willem Aardt. About three weeks ago, armed with a print of William van der Vyver's picture of Carolus Johannes' small tombstone, he started the search on the farm Modderfontein. He found it without much trouble. The farm is now unoccupied, and developed into a hunting farm. With the necessary permissions Willem searched the farm in his four-wheel drive vehicle and eventually found the remnants of the small fram graveyard. It is no longer existing as a graveyard and only three tombstones were lying around, ie. those of Carolus Johannes and two van der Vyvers probably Carolus Johannes'inlaws.

After consulting with me, Willem took the little gravestone of Carolus Johannes back to his farm. It is a small white marble stone of 40 x 40 cm and 30 mm thick. The letters are still clear after 180 years but the stone itself is overgrown by moss and lichens. Willem, cleaned the stone neatly and put into a frame of angle iron to prevent it from bursting and breaking and then erected it in the Van Aardt family cemetery on Baviaanskrans.

Whilst William was busy cleaning the little stone a wonderful thing happened. One of his elderly workers helped with the task. The farm worker asked Willem if he knew about the graves a few hundred meters away, along the Fish River. Willem responded negatively and the worker offered to take him there. 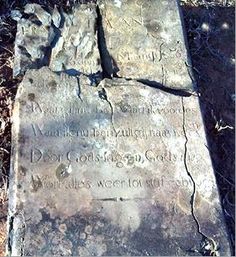 However, when they arrived the site was so dense and overgrown that they could not reach graves . The next day, Willem took some other workers to the site and it took them two days to make a path through the dense thicket. And there lies three sandstone gravestones. Two of the tombstones were eroded and broken apart to such an extent, they were unrecognizable. The inscriptions are completely destroyed. That there was something left, was in itself a miracle because the cemetery was in the path of the 1974 flood that washed out two deep ditches on either side of it.

But the third stone created  another gooseflesh moment. Although also broken into pieces, after I fitted the pieces together, the name of Frans Johannes van Aardt and date of death June 6, 1856 was clearly distinguishable.

As far as I am concerned the circle that I started drawing in 1984 was now completed in 2010 with the restoration of Carolus Johannes' small gravestone and the discovery of Frans Johannes' grave and probably the graves of his two wives.