WELCOME TO THE GSSA BRANCH OF THE NATAL MIDLANDS

The Natal Midlands Branch of the Genealogical Society of South Africa is based in Pietermaritzburg, the capital of Kwa Zulu Natal and the location of the Pietermaritzburg Archives.

The branch is currently under the curatorship of the KwaZulu-Natal Family History Society (KZNFHS).

KZNFHS/GSSA meets on first Saturday of every month (except December and  January) at 9:30am for 10:00am, at the Hilton Library, Hilton Ave, Hilton. We alternate between speakers and workshops on all things related to Genealogy.

Extensive research sources are available to researchers at all meetings. Members have a wide range of genealogical interest of settlers to Natal including those from St Helena and India.

We are fortunate to have members who are specialists in their respective fields, such as Shelagh Spencer on early British settlers, Dr Krish Moodley on Indian settlers, Dr Mike O’Connor on Irish ancestry, to name a few.

The Chairman is willing to open the library at other times on request.

Decades ago, when I was about six years old, my parents and I spent a night at the Plough Hotel in Longmarket (now Langalibalele) Street in Pietermaritzburg's city centre. To my great excitement, in the early hours of the morning the sprawling, corrugated-iron-roofed building across the street came to life. As I remember, standing at the window in my pyjamas, out of the half-light emerged a noisy armada of small trucks and horse-drawn carts loaded with fruit and vegetables.
Years afterwards, the Plough Hotel became a retirement lodge named Ken Collins House, which later was demolished to make way for the parking lot of City Square Spar. Later still, Nando's and Boxer outlets were built on part of the footprint of the vanished hotel.

From Germany to Alfred County, Natal

A Journey Down Memory Lane
The Move to Africa 1883
From Germany to Alfred County, Natal
By Eckhard von Fintel, 17 July 2013

On Saturday 25 May 2013 the German South African Cultural Society South-Natal organised a journey down memory lane to remember the arrival of German settlers in Alfred County (also known as Alfredia) in 1883, 130 years ago. Alfred County lies between the Mzumkulu and Mtamvuma Rivers and reaches westwards to the Ingelirange of mountains. Its eastern border is the sea.   A group of “German Settlers” The “Settlers” about to set foot

in their new “Heimat” The activities started off early in the morning with a trip of “German Settlers”, mostly descendants of the original settlers, on a boat of Brian Lange the Captain, to re-enact their landing at the Spillers Wharf bank of the Umzimkulu River. The Spillers Wharf was used as a landing place due to difficulties at S. Wharf.
The Group of "German Settlers" was accompanied by Renold Sayers the great grandson of the late Ferry Master Bill Sayers. (Renold played the role of Bill Sayers).

On arrival Peter Stoppel jr., a great gransson of Reverend Peter Stoppel, welcomed the arriving “German Settlers”. Reverend Peter Stoppel was the German Missionary who motivated the "Move to Africa" in 1883. This was followed by a celebratory Zulu dance performed by a group of young Zulus from Umzumbe. Then Mr Shinga, a retired head master from the area and cousin of the former chief, welcomed the group.
Thereafter all participants proceeded along a historic route as follows: Proceed to Lot 7 Albersville, the land allocated to H. F. Fynn by King Shaka and now a trust land for the descendants of H. F. Fynn and Bill Saunders.
Then travelled along Albersville Road and viewed the property originally owned by the Albers family who were part of the 1883 settlers. Thereafter travelled through Marburg, named after the City of Marburg in Germany (along Wimpy, Venus & Dairy Roads) and stopped at the Marburg Primary School.
Then the procession went to the site of the Marburg Lutheran Mission Station, established by Reverent Peter Stoppel in 1867. Viewed the grave yard and then gathered in the church to listen to a talk by Oscar Brüggerman, Chairman of the local

German South African Cultural Society South-Natal and descendant of a pre-1883 settler, on the history of the mission station.
Thereaftrer proceeded to the Bethany Lutheran Church, Izotsha, and viewed the church buildings which were
initiated by the 1883 settlers. In the church hall pictures and artefacts of the early settlers were displayed. Also
various family books were available for the visitors to browse through. Thereafter Oscar Brüggemann gave another
presentation, this time on the history of the German Congregation. This was followed by a finger lunch. In the
afternoon descendants of the settler families had an opportunity for an informal chat with coffee and cake

During Heritage Month in September, the provincial heritage body Amafa presents it's annual awards. This year Eckhardt von Fintel was presented the Annual Amafa Award for his research and publications on the history and genealogy of the German community of KwaZulu-Natal 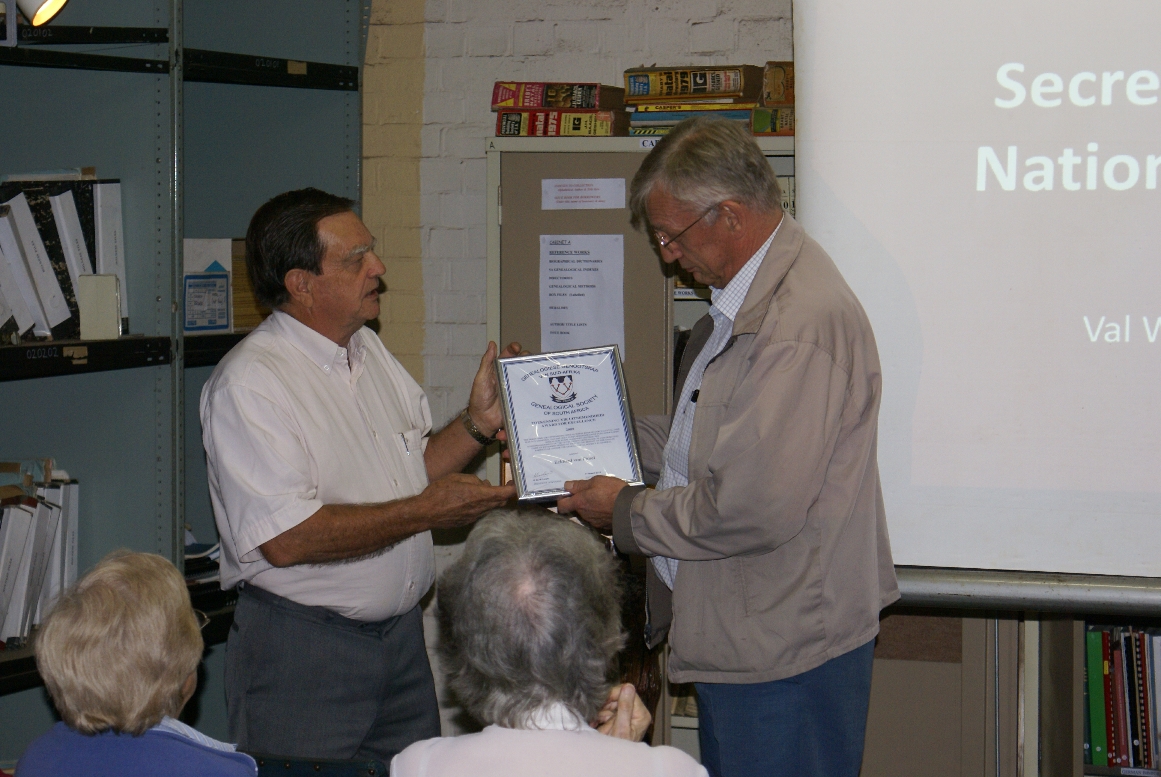 In 2009 the Genealogical Society of SA made a certificate Award of Excellence for his dedicated service to the Genealogical community over many years. Eckhardt has a huge data base of information about early German Settlers and in fact has written a number of books on the subject. He has lectured extensively and has served on a number of committees related to Heritage and German Culture. He is a past Chairman of the Natal Midlands branch of the Genealogical Society of SA and has served on the committee for an extensive period.

Due to the fact that he was unable to attend recent National Annual General Meetings the certificate was only handed over in April of this year by the local chairman, John Deare.

Pictured are some of the 29 members who attended the traditional end of year get-together held at the picturesque Hydrangea House in Hilton . This made it less distance for our Howick members to travel. It was an ideal opportunity for our newer members to chat to more experienced researchers. Notably ,Shelagh Spencer, Dr. Mike O'Connor, Tessa King, Pam Barnes, Rodney Coyne, Eckhard von Fintel & Val Ward. 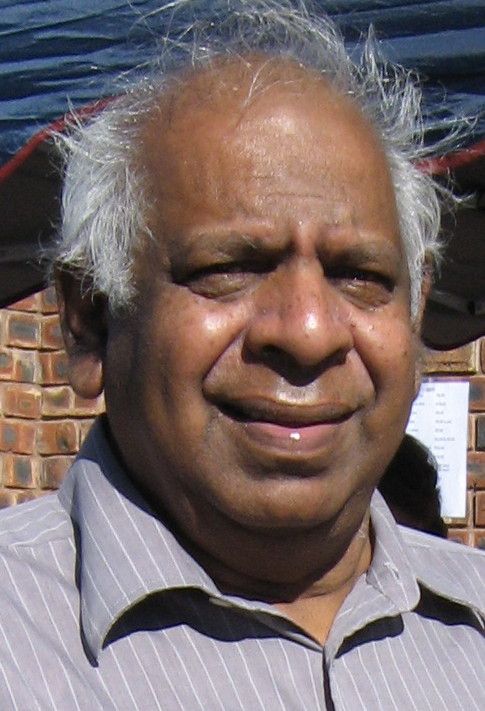 Dr Krish Moodley is a retired chief specialist, obstetrics and gynaecology. He has been a member of The Family History Society for a number of years and has been particularly helpful in assisting Indians research their Indentured Labourer ancestors. He has also given talks to the branch on two occasions.

His grandmother, Annamah Vather was a very colourful character and he submitted a fascinating article about her to the Witness. She came to South Africa as a 16 year old girl accompanying her new husband, a 50 year old Grand Uncle. She died owning many properties and was the second-highest payer of rates in Pietermaritzburg.

The Society has found it particularly difficult to help Indians due to the difficulty in seeing documents held by the old department of Indian affairs, now Home Affairs.