The Johannesburg Branch of the GSSA serves genealogists in the immediate Johannesburg area. The Branch holds meetings on the 3rd Saturday of every month except December.

Place: Currently our venue is being negotiated so please contact one of our committee (see below Information) to confirm where the next meeting will be held.

Time and Format: Monthly meetings generally start at 12.00 noon with a research period followed by the main meeting at 14:30.

Information: Please contact David Kinghorn on 082 808 4864  This email address is being protected from spambots. You need JavaScript enabled to view it.  Doreen Piner on 083 650 2063

Natalie da Silva will be talking about the different records housed at the National Archives and how best these records can serve the genealogical researcher. After the talk we will be having our end of year function.

Stan Close has been researching further into his Jewish Roots in Belarus. He will share his interesting findings with us.

Visit to Jewish Roots in Belarus

Stan Close who will be telling us about his visit last year to Belarus in search of his Jewish Roots. This promises to be a very interesting meeting and has raised my interest me so much that when I realised how little I knew about the Jews in South Africa.
â€œI was born in Bulawayo in (then) Rhodesia, attended primary school in Bulawayo and Ndola, and senior school in Johannesburg.
Stanley John Close married Edith Close (yes â€“ maiden name Close) on 12 December 1970 in Graaff Reinet. The fact that the couple shared the same surname begged the obvious question whether the two Close families were related in any way. And so Stanâ€™s genealogical research began. Back in the seventies this was not easy as the internet wasnâ€™t around, most other family members were luke warm on the subject, and all charts and family trees had to be done by hand. Stanâ€™s research dribbled along until 2015, when some new information on the Jewish side of the family came to hand, and he decided to revive his research work, on the Jewish line as well as the two Close lines.
The Jewish line : Stanâ€™s grandfather, Alan Robert Close, married a young Jewish lady, Lilian Sylvia Rosenberg in (then) Salisbury on 23 July 1919. Lily was the daughter of a Russian Jewish couple, Coppel and Mathilda (nÃ©e Mechanik) Rosenberg, who had emigrated from two small villages in then Russia, now Belarus, to settle in Bulawayo, Rhodesia. This part of the research concerns the origins of the Jewish family in Belarus, the passage of the Rosenbergs from Belarus to Bulawayo, their lives in Bulawayo, and follow up on Rosenberg descendants in South Africa, England and the USA.
In August 2015, together with a local genealogist/ guide, Stan and his cousin Paul Tomlinson (Paulâ€™s mother was my grandmother Lily Rosenbergâ€™s sister) visited Vilnius in Lithuania and the towns of Vashiliski, Zheludok and Scuchin in Belarus â€“ where our Jewish family originated - to uncover as much information as possible regarding the original Jewish family (ies) who had lived there, and also to expose ourselves first hand to the typical way of life in these small Belarusian villages.

George Shaw gave a fascinating insight into his 40 yearâ€™s research into his family history to the Johannesburg Branch of the GSSA for their April 2016 meeting. Georgeâ€™s approach to genealogy is not just lists of names, places and dates. Rather it is to collect documents and photographs and other items from the period, making up a detailed story of what was going on at the time
Click here to read the article

The meeting gave an opportunity for members to tell about their recent discoveries, each giving a short presentation. 11 Members briefly shared their experiences during their research. Marion Hofmeyr remembered her grandmother and showed a certificate authorising her grandmother to teach weaving. Also she showed some of her grandmotherâ€™s later crochet work as well as small bust of her grandmother. Warren Cassidy discussed some of his Cassidy relatives, one of whom was South African-born doctor who was the physician to King George V. Also he showed how he was related to the Spencer family.
Read More 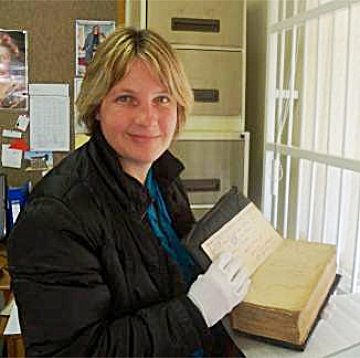 Kitchenerâ€™s Scorched Earth policy. Elria Wessels of the War Museum, in Bloemfontein explained that it was through the tireless insistence of The Quakers or the Society of Friends that many looted bibles made their way back to this country.
The Johannesburg Branch took up the challenge to raise funds and become directly involved in the Bible Restoration Project run by the War Museum, Bloemfontein.
Bible records are a PRIMARY source for genealogical research - do you have an old Family Bible â€“ or know of someone who has one? GET IN TOUCH with a member of the GSSA- they know what to do!! Vicky Heunis holding the Bible we chose to be restored with funds donated by the Joburg Branch of the GSSA.