Founded in 2004, eGGSA is the virtual branch of the Genealogical Society of South Africa, and provides a virtual home for everyone from the beginner to the most advanced family historian.

To read more about us: click on the relevant links belows

Some of our Projects

To become a Member

Johan Diedericks has extracted from the data at National Archief at the Hague, 123 more of these VOC employees who settle at the Cape of Good Hope, and made them available onthe eGGSA web site. They have now joined those previously extracted by Lizette Svoboda, on the Stamouers.com section of our web site. Our thanks go to Johan and Lizette for making their hard work available.

VOC (Dutch East India Company) Accounts from Ships' Pay Ledgers, 1662-1805, contain information about many of its employees who settled at the Cape. Below are a number of excerpts from the online links to the Nationaal Archief (The Hague, Netherlands) web sites gahetNA and VOC - Opvarenden which seem likely to refer to those settlers. If you have any to add, please copy to a Word document and email them to the Stamouers editor.

The Nationaal Archief is making a huge effort to digitize the complete collection of the VOC and they hope to have it completed by 2017.

As of May 2016 almost all the Zeeland accounts have been digitized and put online, a large number of the Amsterdam ledgers are currently being scanned and should be available at the end of May or early June; the next batch is already planned.

For an introduction to these Ships' Accounts (soldijboeken) please see Corney Kellers' explanation on the Rekeningen uit de Scheepssoldijboeken 1662-1805 page.

Congratulations to Riana le Roux and her team of volunteers for this outstanding achievement. It is the product of many years of hard work, patience and dedication.

A big thank you to all of you going out to the cemeteries to take the photos, to those of you doing all the uploads onto the website, indexing the photos and cemeteries, maintaining our website. The project is extremely valuable to us and we appreciate your contributions.

The project is growing so fast that we are looking forward to the next milestone.

TANAP (A treasure trove of information!)

Written by Mariana Olivier. Posted in The eGGSA branch

Lizette Svoboda from Thailand has added the years 1810 to 1816 to her transcript of the Swartland (Malmesbury) NGK baptismal registers. These are now included in the searchable eGGSA baptisms database.

The names of 260 immigrants who arrived at Cape Town between November 1883 and January 1885 have been added to our Passenger Lists database. These have been transcribed by Richard Wolfaardt from the Cape Archives listing PWD 2-756 using photographs taken by AndrÃ© van Wyk.

A list of the surnames added can be found here

Sue Mackay has photographed some further British Settler letters from CO48, English National Archives at Kew, covering the years 1830 to 1834 inclusive and has started transcribing them for the 1820 Settler Correspondence section of the eGGSA web site.

The new transcriptions can be seen under Post 1820 Letters menu item on the right hand side.Completed so far are the 1830 letters of Richard ADDISON re Timothy WILSON, George and Isaac DYASON, Samuel Hood HART, Henry MURPHY, John MURRAY re George MORGAN, and William and James WHITAKER, as well as the 1831 letters of Joseph DYASON (re son George), Thomas Jervis BIDDULPH and Duncan CAMPBELL.

The third volume of baptisms, 1883-92, of Holy Trinity Church, King William's Town, has been transcribed by Brenda Gassner from William Jervois' photographs of the original register in the Cory Library, Rhodes University, Grahamstown, MS 19 189/2, by agreement with the Cory Library.

This completes the Holy Trinity baptism from 1849 to 1892 and these can be searched in the: eGGSA Baptism Registers. 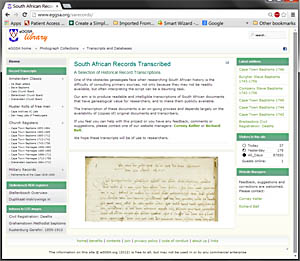 The second phase of a project to index Corney Keller's transcripts of the Cape Town Dutch Reformed (NGK) registers 1665 to 1756 has been added to the BDM database. 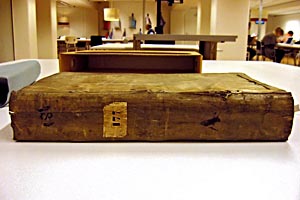 Corney Keller has added photographs of the Ship accounts (scheepsoldijboek) for Isaack Dalgue, who arrived at the Cape on the ship Nesserak in November 1713, to the growing collection of these documents that he maintains on the eGGSA web site: Accounts from VOC Ships' Pay Ledgers 1662-1805.

These volumes contain details of all the men and all the transactions made on a single outward bound voyage. Each time a ship departed for the east, a new ledger was compiled in duplicate. When the ship reached Batavia, in Indonesia, one copy (schaduw-kopie) was deposited there and the other copy (meester-kopie) was returned to the Netherlands. It was the copies that reached home that survived and are now in the Nationaal Archief at the Hague.

The 18th century document of Death Notifications in the Cape Archives, on the page where Dalgue's death is recorded, has a note added by Colin Graham Botha: Vide wills of the Orphan Chamber vol 11 no 29 of 1795, Will of Isak Dalque (died 6.4.1759) and Sara van Wijk wherein he states his proper name was Johannes Augustus Dreyer.

houses a collection of photographs: