In 1995 Margaret Cairns (1912-2009) received a Lifetime Achievement Award from the Genealogical Society of South Africa in recognition of the dedication, hard work and effort performed over many years, to foster, champion and promote the Science of South African Genealogy.

In 2000 an anonymous donor donated a floating trophy in honour of Margaret Cairns for the purpose of stimulating research.

The criteria for this award is:
-the recipient has to be a member of the Western Cape Branch,
-the research has to be of a high standard,
-original and from primary sources
-reflect micro family genealogy / history in the Western Cape. 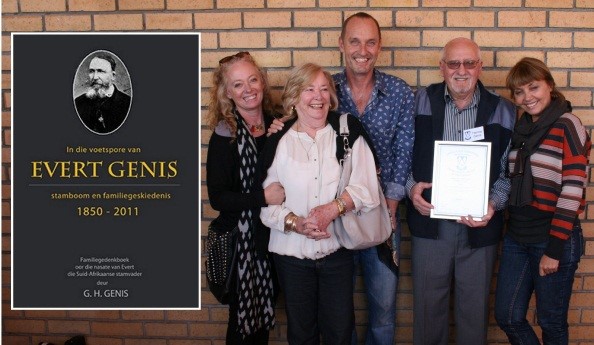 The couple Evert Genis and Margaretha Genis née De Graaff moved to the Cape from the Netherlands in 1850. Their male offspring, and also some female lines, are documented, in most cases to the present generation There is also considerable information about Evert Genis' ancestors and the origens of this surname in Europe.
The story of the founding parents and their children, seven sons and two daughters, also sheds light on micro-historical aspects of the development of Namaqualand in relation to fisheries, shipping, education, settlement, agriculture, police and the church.
Later the family also spread to the north and then their experiences during and after the Anglo-Boer War comes into play, as does their participation in the development of the Springbokvlakte in the former Transvaal.
The book is very readable writing; the layout makes it easily accessible and is richly illustrated.

2010 Geen toekenning
2009 Glenda Raad received the Margaret Cairns award for her series of articles on the people of Noupoort, 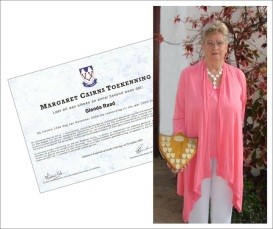 ‘Just ordinary people: Noupoort Social History 1803–1960', which has been published in our branch's quarterly journal Capensis from the fourth edition of 2005 and is still being continued. This is a valuable piece of research because it preserves the memories of a whole community, which has since dispersed.

2008 Ockert and Sasa Malan were joint recipients of the Margaret Cairns award based on their ongoing contributions to genealogy and micro-history of our country and its people.
The Malan couple' over several years, separately and jointly' published numerous articles in our branch's quarterly Capensis and GSSA quarterly Familia.
They are also actively involved in Heemkring of Stellenbosch, the Cemetery of Stellenbosch and the capturing of the history of the NG Mother Church of Stellenbosch.
Ockert has a publication "Die Van Schalkwyks van Nieuweveld ' and Sasa has been the editor of Capensis since 2002.
2007 Senobia Lutz received the Margaret Cairns Award for her publications ‘Johann Karl

Gerhard received the award for his collaboration with physicians who studied hereditary diseases with his expertise as a genealogical researcher in the quest to locate individuals who are at risk for these diseases so that necessary precautions can be taken. Furthermore, the award is also for the four articles he published Capensis in 2005: ‘Mary Elizabeth Cummings, waarnemer van die Venus-oorgang in 1882', ‘‘n Brief van1856 vanaf Heidelberg (Kaap)', ‘Ds A B Daneel (1836-1899) en sy kinders' and ‘Skryftalent onder die nasate van die stamvader Hans Jürgen Linde'.
Nico received the award for his publication: Die Walters-diaspora en Familieboek'.
2003 Herbert Fox received the Margaret Cairns Award for his

2002 Geen toekenning
2001 Jan Visagie was the first recipient of the Margaret Cairns Award for his publication "Voortrekkerstamouers 1835-1845”.

(The second edition of this publication was published 2011 in a revised and expanded form.)